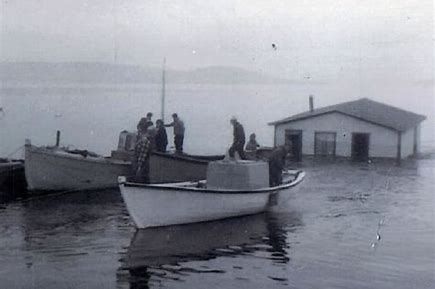 Soon after Confederation the Provincial Government decided that providing public services for the many hundreds of isolated communities around Newfoundland was not practical. They began a centralization program in 1950 to encourage people to move to places where public services already existed. This program began with a $400 grant to each family who moved and by 1958 the grant had increased to $600.

This period saw the abandonment of thirty-one communities in Placentia Bay such as Iona Islands (Rams), Haystack, Sound Island, and Crawley’s Island. The 1960’s saw the acceleration of the process started by the Smallwood Government in the 1950s resulting in the abandonment of many Placentia Bay communities 160 years after the first English and Irish settlers moved there. The new resettlement program called The Fisheries Household Resettlement Program was a Federal Provincially funded program used to speed up the process started fifteen years previous. Now the government became more organized in its approach. Petitions to leave were encouraged by program information officers, and cash incentives were increased to average.

Between 1966-1969, approximately 1000 families from twenty-nine communities in Placentia Bay resettled. By 1969, 122 families had been moved to Arnold’s Cove.  People may never agree as to the exact cause or benefits, if any, of resettlement, but there are some basic reasons which cannot be overlooked. For many the larger communities, public services may not have been a factor, for they had become the centre of their area, although by the 1960’s, majority opinion holds, many of these services were being scaled back by the government to encourage resettlement. Other factors, including the changing technology in the fishery, education, health care, and a general decline in population, all contributed to the abandonment of these communities.”– Arnold’s Cove, A Community History – Kevin A. Tulk

Published by the Newfoundland and Labrador Heritage Website (May 4, 2017)

Resettlement [floating home] uses the image of the floating house as a metaphor for displacement and memory, a suspension between worlds — a place where a lonely spirit is compelled to appear.

We welcome your comments, suggestions, and  any additional information you may have!  Also, please help us with accuracy by advising us of any errors, discrepancies, or omissions.